Radiant is introducing an I2C digital-to-analog converter product that can be attached to the Precision PiezoMEMS Analzyer, Multiferroic II or Premier II and is controlled from Vision. The addition of this extra voltage source makes it possible for the Premier II to measure the performance of thin-ferroelectric-film gate transistors (TFFTs and MFSFETs). This document explains the theory for such testing and gives examples of such tests using Radiant's SFRAM transistors as examples. 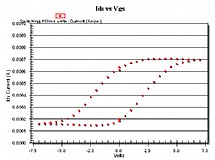 Adding hysteresis to the gate capacitor of a FET greatly complicates the response of the transistor. Tests that exist for standard MOSFETs are not adequate to characterize the performance of an MFSFET. All of the reliability issues that affect ferroelectric capacitors will appear in ferroelectric-gate transistors and must be characterized. This includes fatigue, imprint, retention, and temperature effects. Specifically, transistor current may be a superior method for testing long term retention than threshold voltage drift as it is used today for MFSFETs. Additionally, thin-film transistors made with ferroelectric gates (TFFTs) have the potential to enter commercial markets. They differ significantly from MOSFETS in that some TFFTs may operate bipolar with positive and negative gate and drain voltages. Radiant started testing ferroelectric gate transistors in 1992 using the RT66A. We developed these transistor tests as a means of improving our SFRAM process flow. The transistor tasks in the Vision Library are the culmination of almost 20 years expreience with ferroelectric gate transistors.